London, 19th April, 2022: The Insurance Development Forum (IDF) is delighted to announce the appointment of Michel M. Liès as its next Steering Committee Chair with effect from 19th April 2022. The IDF is a public / private partnership led by the insurance industry and whose members include the United Nations, the World Bank Group and other international organisations.

Mr Liès has extensive experience of the insurance sector, having spent over four decades with Swiss Re – including as Group CEO from 2012 until his retirement from the company in 2016. He has been Chairman of Zurich since April 2018 and continues to shape the insurance sector’s strategic direction, including as a vocal proponent of its role in addressing Sustainability challenges. He is a member of the Institute of International Finance Board, European Financial Services Roundtable and World Economic Forum Community of Chairmen.

“The IDF has made an outstanding policy and operational impact in recent years, delivering the first three country programmes under the Tripartite Agreement, as well as significant mobilisation of new resources in support of the climate and disaster risk financing agenda. This is due in no small part to the Steering Committee under the leadership of Denis Duverne and to the IDF’s working groups, our fast-growing membership, and our partners and supporters.

While some countries have increased their resilience to climate change, the urgency of the climate crisis calls for much greater speed. This creates a critical role for advocacy about

the importance of risk management and insurance in supporting development. In addition, the need for effective cross-sector collaboration to deliver meaningful change has never been more important and this must be a key priority in the immediate term.

It is an honour and privilege to be asked to Chair the IDF’s Steering Committee alongside co-Chairs Achim Steiner and Hiroshi Matano and I would like to thank Denis for the outstanding contribution he has made in championing the work of the IDF. We are on a journey – including extending partnerships, accelerating our operational programmes and mobilising new resources in support of the climate and disaster risk financing agenda – and I am confident that the IDF will remain a key institution for bringing about systemic change.”

Denis Duverne, IDF Steering Committee Chair and Chairman of the Board at AXA, commented:

“It has been an honour to have served as Chair of the IDF Steering Committee for over three years and during this time, we have achieved so much in terms of galvanising the public, private and humanitarian sectors to highlight the crucial role that insurers must play in addressing the adaptation and resilience challenges we face today.

While a huge amount of work still clearly remains to be done – considering the recent IPCC report and roll back in the human development index across the SDGs – I am confident that the IDF will continue to play a pivotal role in bringing about systemic change to combat the climate crisis and help deepen global resilience.

In this regard, I would like to acknowledge the remarkable work done by the German government and the BMZ and thank them for their true partnership in exploring how the public sector can effectively engage and leverage private sector expertise in collaboration with countries. Such partnerships are rare and this alliance with IDF and industry is unprecedented. The work we have done together to establish the Tripartite agreement, and the Global Risk Modelling Alliance (GRMA) with the V20 demonstrates their exceptional leadership in this space and willingness to drive innovation and steer change.

I would also like to thank Rowan Douglas, Chair of the Operating Committee of the IDF and Ekhosuehi Iyahen, our outstanding Secretary General, who have been invaluable contributors to our programmes.

Looking forward, I am very pleased to hand over the reins to Michel whose extensive international experience across our industry makes him an ideal successor to this role and I know that under his stewardship, the IDF’s Steering Committee and the institution as a whole is in exceptionally good hands. I am also pleased that my successor Antoine Gosset-Grainville will continue to ensure AXA’s continued strong engagement with the IDF.”

“I would like to express my sincere appreciation to Denis for his dedicated efforts as Chair of the Insurance Development Forum’s (IDF) Steering Committee since 2018. During his tenure, a new partnership between the IDF, the United Nations Development Programme (UNDP) and Germany’s Federal Ministry for Economic Cooperation and Development (BMZ) was forged – this Tripartite Agreement is aligned with the Insuresilience Global Partnership, which aims to provide 500 million people across the globe with protection from climate and disaster risk by 2025, spurring progress across the Global Goals. And crucially, the IDF is advancing a global shift in thinking: that reducing risk is always better than reacting to shocks.

I am delighted that Michel Liès has agreed to be the next Chair of our Steering Committee. Michel has already made a significant contribution during his time as Deputy Chair, helping to leverage the private sector’s expertise to boost the climate resilience of countries and communities across the world. As the climate crisis intensifies, the IDF will have an increasingly important role to play, pooling the world’s resources and expertise on insurance and reforming the global risk financing architecture. Ultimately, the IDF must continue to be a driving force behind the roll-out of much-needed insurance solutions to some of the world’s most vulnerable communities.”

“I would like to add my sincere thanks and gratitude to Denis for his superb leadership during
his tenure as Chair of our Steering Committee. The importance of the IDF and our mission
has never resonated more strongly and that is in no small part due to his resolute support
and the significant impact he has made in promoting our goals and efforts to achieve
meaningful change.

In a world where the climate crisis is an ongoing and devastating battle, the need for
insurance to close the protection gap has never been greater. The IDF’s critical mandate is
to enhance the resilience of climate vulnerable populations and none of this would be
possible without the research, collaboration and coordination across our working groups as
well as the extraordinary efforts of our members and partner organisations. I am very much
looking forward to continuing to work with Michel and my other Steering Committee
colleagues as we redouble our efforts to address the adaptation and resilience challenge.”

“I would also like to extend my sincerest thanks to Denis for his significant contribution in helping to drive forward the vision of the IDF and its operational agenda and I know that Michel will continue to build on the tremendous work being done to mobilise the extensive network of experts and influencers in the insurance and development sectors as well as the strides being made to strengthen public-private dialogue.

2021 was an important year for climate action, culminating with COP26, and the next decade is crucial – with a fundamental shift in cross-sector activity needed to mitigate climate change and with the insurance industry in the vanguard of helping societies build resilience against climate change. The global goals of a healthy and sustainable planet, social equality, and economic opportunity for all are within reach but our vision of a sustainable future will only materialise through meaningful action being taken today.”

During 2021, the IDF and its members and partners – delivered significant policy and operational impact. At COP26 in November, the IDF announced three hallmark initiatives to connect the insurance sector’s world-leading risk assessment capabilities to the challenges of building further resilience to climate change. In addition, further country projects, events and collaborative initiatives are already underway in 2022.

First announced at the UN Conference of the Parties (COP21) Paris Climate Summit in 2015, and officially launched by leaders of the United Nations, World Bank Group and insurance industry in 2016, the IDF looks to to leverage the technologies, expertise and financial mechanisms native to the insurance industry to enable the world’s most disaster vulnerable governments, economies and populations to enhance risk understanding and build resilience. 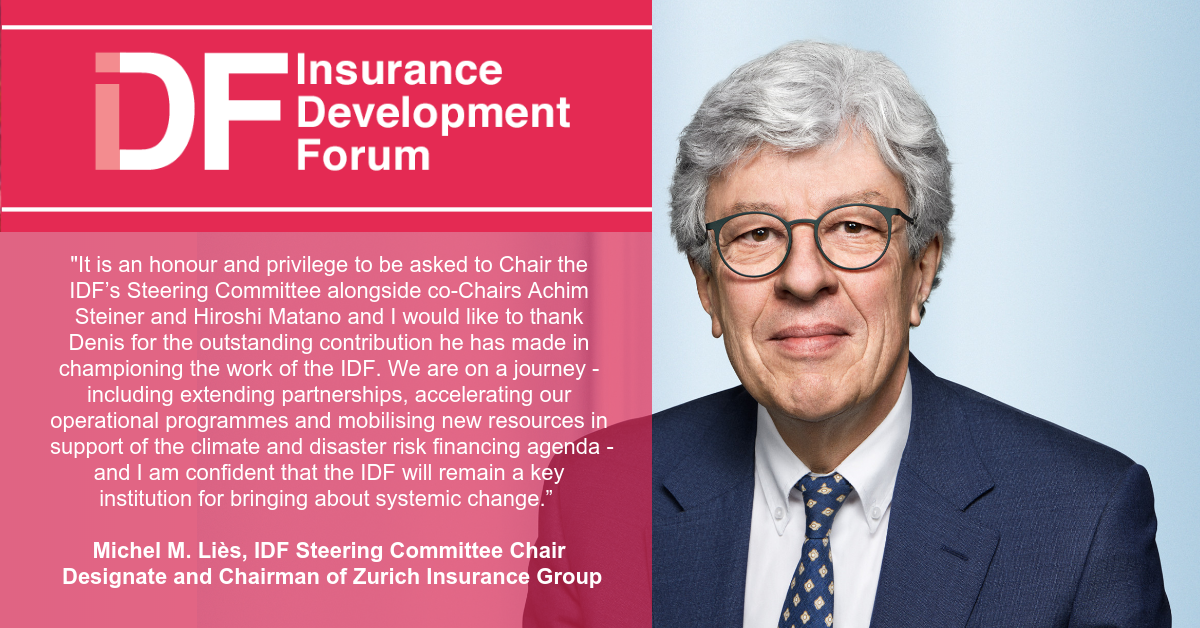