I am honoured to greet you at this forum on this COP26 Finance Day.

On Monday, the Secretary-General said that we are digging our own graves, as the planet changes before our eyes.

The impacts of climate change are already rapidly accelerating.

Extreme weather events doubled over the past two decades. Economic losses from climate-related disasters topped USD200 billion globally last year, and the vast majority of losses in developing countries were not covered by insurance.

The consequences for people are catastrophic. In 2020, 30 million people were displaced by climate-related disasters, three times the number displaced by conflict.

COP26 must be the moment that we agree to transformational change. A change where we commit to carbon neutrality to keep 1.5 degrees within reach, deliver on finance, and secure a breakthrough on adaptation.

This requires our financial systems and our decision-making to take into account, and dramatically reduce, climate risk. Otherwise, climate change could erase all of our investments in development, especially for those most exposed to its impacts.

The insurance industry is uniquely positioned to bolster the transition to net zero and build resilience to climate shocks.

First, we need insurance companies as institutional investors to transition their portfolios and investments, and align with pathways for net zero by 2050.

Already sixty institutional investors have joined the Net Zero Asset Owner Alliance that was convened in 2019 – the gold standard for credible commitments and transparent targets which is managing USD10 trillion in assets.

Some have raised their ambition. 13 insurers and reinsurers have joined the NetZero Insurance Alliance (NZIA), committing to apply net zero approaches to underwriting portfolios. Others must follow suit.

Second, we need risk managers in the insurance industry to lead the way to build greater resilience.

This is an area where we have seen major progress. The World Meteorological Organization recently reported that while climate-related disasters increased by a factor of five over the last 50 years, deaths decreased around three-fold thanks to improved early warning and disaster management.

But measures that worked in the past will not be enough for the future. We are staring down the barrel of a humanitarian catastrophe of staggering proportions, as climate change puts more lives, livelihoods and properties at risk.

Countries need finance and financial tools to cope with the growing risks, rather than focus on the aftermath.

Denmark, Sweden and the Netherlands have answered the Secretary-General’s call and I urge other donors and the MDBs to agree to this goal.

It is remarkable that after close to 30 years of international climate negotiations, after witnessing increasingly more frequent, destructive and deadly climate impacts, and after promising to balance adaptation and mitigation support in the Paris Agreement- adaptation finance remains a mere 25% of total climate finance. 25% is not balance.

While some donors have recently announced their intention to double and triple their climate finance commitments, we must all acknowledge that this is from an extremely low base.

For example, one major donor has announced that it will triple its adaptation finance. But this tripling means that adaptation support will now be a mere 26% of that country’s climate finance support. As we continue to see with vaccines and covid recovery spending, failure to deliver on climate adaptation and resilience threatens to further exacerbate global inequalities.

We know that adaptation and resilience projects and programs are harder. The transaction costs are higher, and the return on investment lower. But failure to address adaptation and resilience at the scale required will be measured in loss of lives and livelihoods. And this burden will fall disproportionately and unfairly to those who have contributed least to the climate crisis.

I therefore commend the insurance industry for establishing the Global Risk Modelling Alliance, its effort to develop a Global Resilience Index, and the offer to support V20 countries.

The Secretary-General has also repeatedly called for scaling up catastrophe triggered financial instruments, such as regional risk pools (Africa Risk Capacity and Caribbean Catastrophe Insurance Facility), and strengthening those that support ex-ante resilience-building.

Affordable and flexible sector-based insurance solutions for the poor, expansion of country coverage and access to premium and capital support or even use of pre-arranged financing to drive anticipatory action will be necessary.

As part of the package of support, the United Kingdom and Germany have committed 120 million pounds for early action, disaster risk and insurance, in line with the InsuResilience Global Partnership and Risk-Informed Early Action Partnership (REAP).

Other donors must quickly recognise the value of this investment to the lives of billions in developing countries and step up. Resilience makes economic sense: A USD1.8 trillion dollar investment in adaptation measures would bring a return of USD7.1 trillion dollars in avoided costs and other benefits.

Micro, small and medium-sized enterprises make up more than 70% of all businesses in the V20, and contribute from 20% to 80% of GDP. I look forward to the rapid advancement of the V20-led Sustainable Insurance Facility (V20-SIF) that will develop climate-smart insurance solutions to build their resilience.

We at the UN believe that partnerships work. We will continue working with the insurance industry through the InsuResilience Global Partnership and the recent UNDP Insurance and Risk Finance Facility which will strengthen resilience to climate-related shocks.

In conclusion, I thank you for your leadership.

We are in a race against time, and it is a race we cannot afford to lose.

Let’s work together to rapidly reinforce our systems and build a more equitable, inclusive, and resilient world for all of our people, all of our children and our planet. 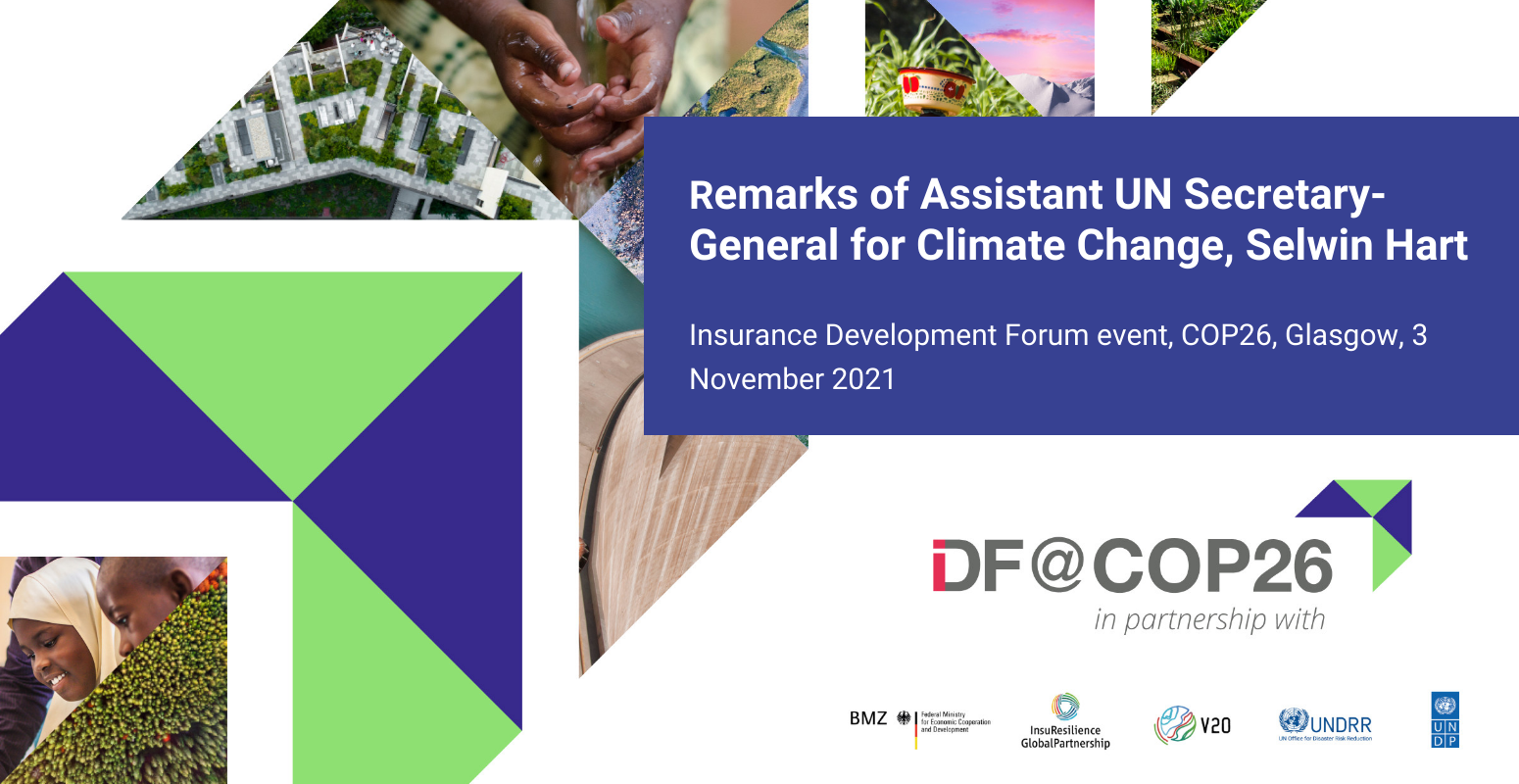