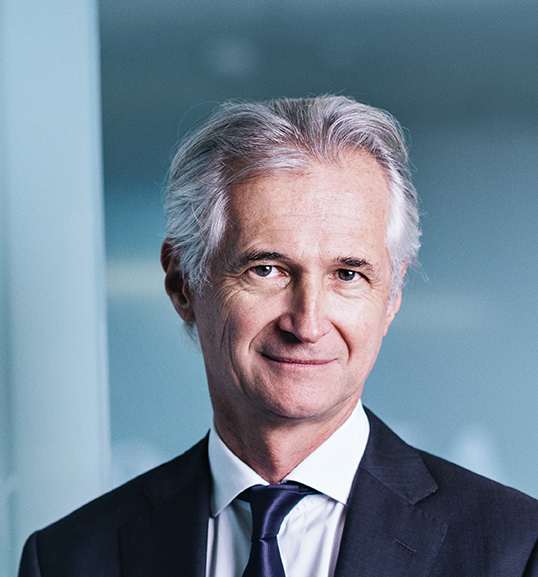 Chairman Board of Directors

Antoine Gosset-Grainville is a graduate of the Institut d’études politiques of Paris and holds a post-graduate degree in banking and finance from the University of Paris IX Dauphine. He was admitted to the Paris Bar (2002) and the Brussels Bar (2002). After graduating from the French École Nationale d’Administration, he began his career, in 1993, at the Inspection Générale des Finances, before taking the position of Deputy General Secretary of the European Monetary Committee and later of the Economic and Financial Committee of the European Union in 1997.

From 1999 to 2002, he was advisor for Economic and Industry Affairs in the office of Pascal Lamy, the European Commissioner in charge of Trade. In 2002, he became partner at Gide, where he managed the Brussels office for five years before becoming in 2007 Deputy Director of the Cabinet of the French Prime Minister, in charge of economic and financial issues and the management of the French State’s investment portfolio. In 2010, he was appointed Deputy Managing Director of the Caisse des Dépôts Group in charge of finance, strategy, investments and international operations and Interim Chief Executive Officer of the Caisse des Dépôts from February to July 2012.

In April 2013, he co-founded BDGS Associés (law firm), where he is presently a Partner. He was appointed as a Board member for AXA on June 30, 2020 and also has held positions on Schneider Electric SE and Fnac Darty’s Boards. AXA’s Board unanimously decided to appoint Antoine Gosset-Grainville as Chairman of AXA’s Board of Directors, effective of Denis Duverne’s retirement on April 28, 2022.