Adaptation and Resilience were the IDF’s strong focuses at COP27 as, together with its global partners, it announced a new Tripartite sovereign risk transfer programme for Nigeria, milestones in the development of the Global Resilience Index Initiative, and the Global Risk Modelling Alliance’s adoption as a key tool for the Global Shield

Sharm El Sheikh, Egypt, 21st November, 2022: The Insurance Development Forum (IDF), a public / private partnership led by the insurance industry and whose members include the United Nations, World Bank and other international organisations, made a number of key announcements during the 27th Conference of the Parties of the UNFCCC (COP27), convened in Sharm El Sheikh, Egypt between 9th – 19th November 2022.

Adaptation and resilience were the strong focus of the IDF and its partners at COP27 as we continued our mission to optimise and extend the use of insurance and its related risk management capabilities to build greater protection for people that are vulnerable to disasters with the following key announcements:

– The Global Risk Modelling Alliance (GRMA), a joint public-private technical assistance programme with a mission to address the global shortage of climate and disaster risk information, announced that it was selected as Key Tool to Support the Global Shield Against Climate Risks Initiative, backed by the V20 and the G7. In addition, an additional EUR 10 million in funding for the GRMA was confirmed, and Pakistan was announced as the first pathfinder country for the initiative.. Access the announcement in full.

– The Global Resilience Index Initiative (GRII), a multi-partner taskforce, announced during the COP27 World Bank Plenary Session on 12th November key milestones in its development towards an open, standard set of climate metrics and data to measure risks to communities, infrastructure and ecosystems. Access the announcement in full.

– Under the Tripartite Project: The IDF, the United Nations Development Programme (UNDP), the German Government and the Lagos State Government in Nigeria signed a new agreement to launch of a EUR 1.5 million project to develop a sovereign risk transfer scheme to provide flood risk cover and risk modelling expertise to improve the resilience of the population of Lagos State, Nigeria. Access the announcement in full. Two further Tripartite Programme country agreements are expected to be announced shortly.

“Our actions at COP27 – including the announcement of another in-country sovereign risk transfer projects, and significant operational progress and momentum in the pioneering GRMA and GRII programmes – are a testament to how insurance can influence systemic change, and what can be achieved through true cross-sector collaboration.

This progress and its impact is a reflection of incredible hard work, dedication and resources committed by the IDF, its members and partners and is indicative of significant mobilisation of new resources in support of the climate and disaster risk financing agenda.

And yet, as has been noted throughout COP27, time is not on our side. The urgency of the climate crisis affects us all, and calls for even greater speed and dedication.

Only through the three pillars of implementation, engagement and advocacy can we consolidate and deliver on our operational priorities, deepen and expand our engagement across public and private sectors, and strengthen the convergence between insurance and disaster risk management and its contribution to society.

There is much more to do, and I am confident that the IDF will remain a key institution for bringing about systemic change, increasing collaboration and influence as we head into 2023.”

First announced at the UN Conference of the Parties (COP21) Paris Climate Summit in 2015, and officially launched by leaders of the United Nations, World Bank, and insurance industry in 2016, the IDF looks to leverage the technologies, expertise, and financial mechanisms native to the insurance industry to enable the world’s most disaster vulnerable governments, economies and populations to enhance risk understanding and build resilience. 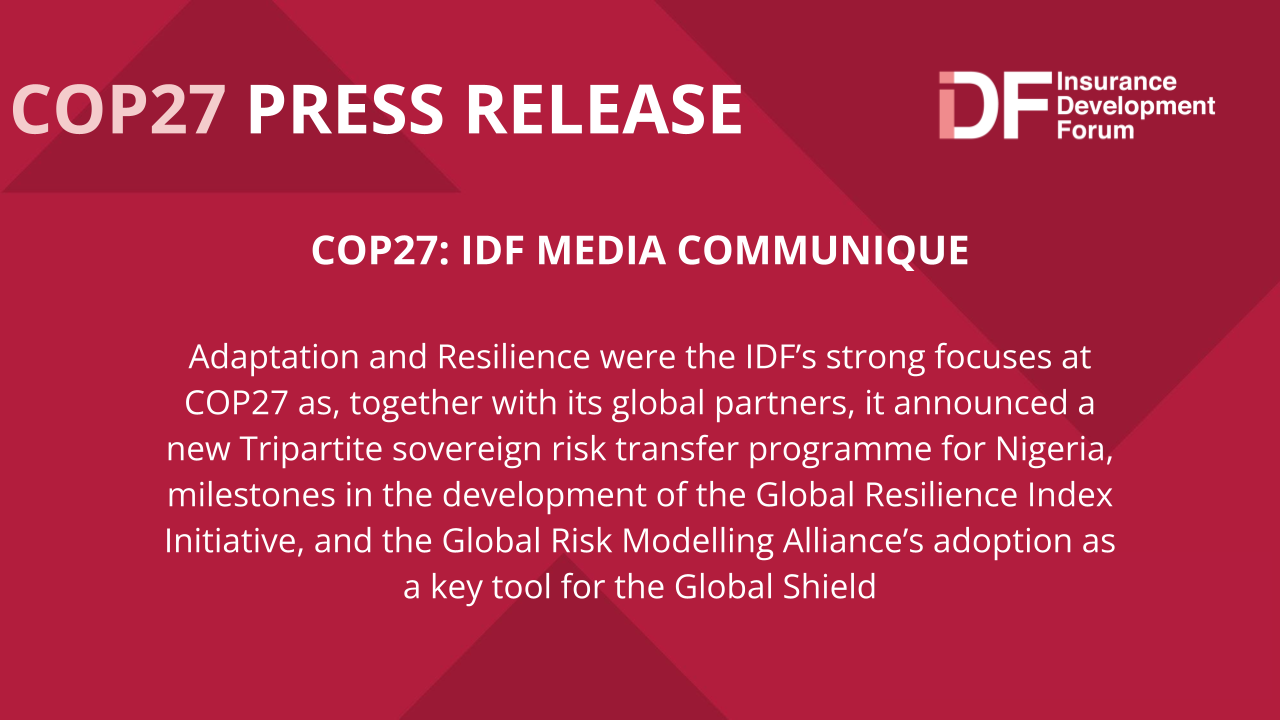